April took me to Malta with our second-year Marine Geography undergraduates. (I know it’s now July, and April was a while ago. I’m doing my best here.)

While Roo Perkins led one crew on snorkeling surveys of biodiversity in a selection of bays around the island, Rhoda Ballinger & I led a second group on a rambling look at Malta as a human–coastal system. We didn’t stop by the Megalithic temples this time around – even though they serve as a mind-bending reminder of just how long Malta has been a maritime crossroads, a hub of coastal development in one historical period after another – but we did stroll through Valetta, stole a glance at Popeye Village (of 1980 live-action-musical-spectacular fame), and spent an entire, glorious day on Gozo. 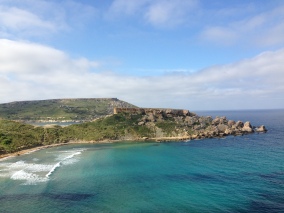 The access road to Anchor Bay, across from Popeye Village. 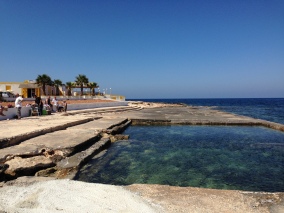 Students check out the valley approach to ir-Ramla, Gozo. 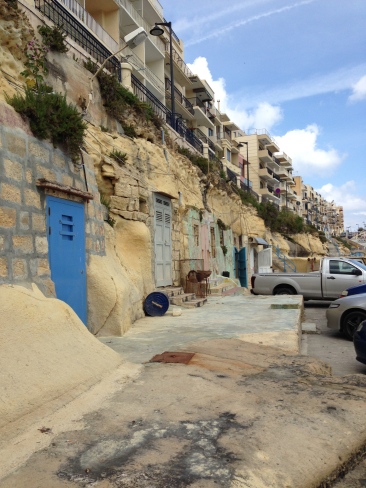 Skiffs, dories, and the “Maltese eye.”

A “boathouse” at Xwejni. 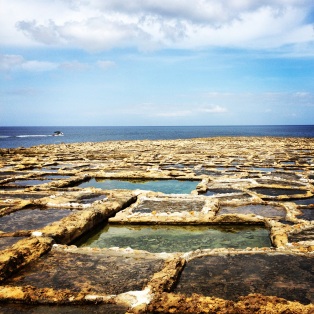 Xwejni – cleaning the salt pans to start the season.

Checking out the Azure Window at Dwejra, Gozo.. 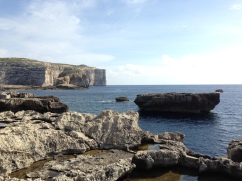 Once you start seeing salt pans, you see them everywhere – even at the freeport. 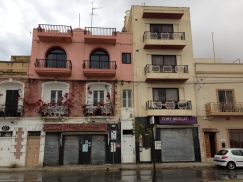 Low-angle light across St. Thomas Bay, at the south end of Malta.

Lots of construction on the north side of Marsaskala…

…and much of it empty.

On Gozo, we saw working salt pans at Xwejni Bay that have been in operation, more or less, since the Romans (who made their mark by chipping the natural, shallow, amorphous dissolution pits in the limestone into more regular, polygonal shapes). The family we met have been harvesting salt in their 350 pans – comparable to a UK garden allotment – for over 150 years. If the salt season’s a decent one (no big waves or heavy rains to flush out the pans or dilute the brine wells), they’ll harvest 22 tons. (Yup.)

At Dwejra, we admired the Azure Window – a huge limestone sea arch that may not be long for future admiration – and I waxed speculative about the origins of a cobble beach feature trapped inside the Dwejra Inland Sea (more on that in a follow-up post, after I do some background reading).

But one of the most striking things to me was the sheer quantity of empty concrete construction in evidence. I have no idea how old much of it may be – pre-2008? Were we looking at another manifestation of the global housing crash? A coastal tourism engine on hold. Did the capital dry up? Or was the capital ever there, and this the Zorro mark of speculative expansion?

I also found myself scratching my head about the legacy of Malta’s 19th- and 20th-century history as a strategic military waypoint. How does an island remade (and remade and remade) into a sprawling military complex evolve? As geographical niches, such places must exhibit their own kind of dynamics: what, then, are the human–landscape evolutionary commonalities between Malta and other maritime-crossroads exemplars?

One thought on “Malta’d (field notes and photos)”