It almost worked the first time.

I’m writing from the University of Minnesota’s St. Anthony Falls Lab (SAFL) in Minneapolis, home of the National Center for Earth-surface Dynamics (NCED). Thanks to Chris Paola, I’m here as a visiting scientist, funded by NCED and a small research grant from the British Society for Geomorphology to run an experiment I pitched earlier this year as “the morphodynamics of breaching”:

Breaching is a universal geomorphic phenomenon that occurs when a channelized or otherwise contained fluid flow overwhelms its confining boundary. Common fluvial examples of breach-related morphologies range from crevasse splays, where flow through a levee breach delivers sediment to the proximal floodplain, to flood-induced avulsions that create a new channel course. Breaching is also typical along sandy coastlines, where water elevated by storm surge and wave action can push through dune fronts and drive cross-shore overwash. In barrier island systems, overwash is an essential mechanism by which the islands maintain their height and width relative to sea level. A locally persistent or energetically focused coastal breach can cause a new inlet to open, which in turn affects habitats, nutrient pathways, and sediment transport in the back-barrier environment. Breaching phenomena are evident in a diversity of other landscapes, as well, active and relict: in sedimentary units in the geologic record; fluvial channels on Mars; submarine density flows; volcanic rilles on Earth, the Moon, and Venus; and alkane channels on Titan, for example. In built environments, breaching is a natural hazard….

For the next two weeks, I’m working primarily on the barrier island exemplar. 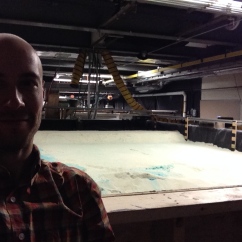 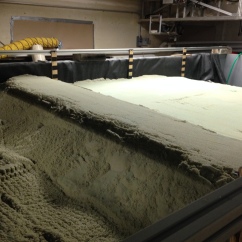 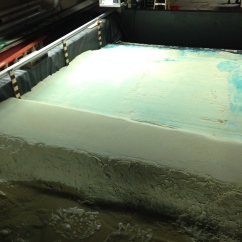 Beginning to fill the “upstream” side of the barrier. 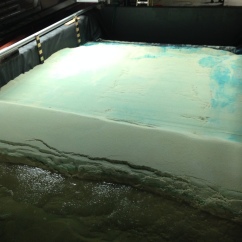 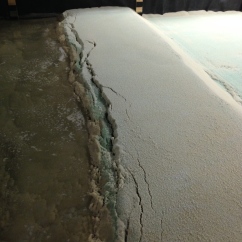 Some slumping & settling on the “upstream” face. 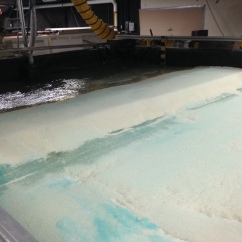 Water level nears the top of the berm. Infiltration evident (wet line) at the back-barrier toe. 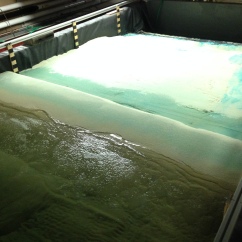 Almost over the top… 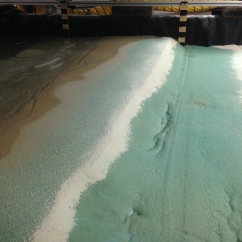 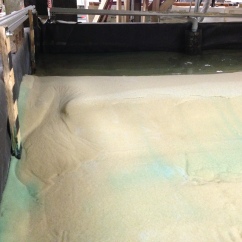 One “real” lobe. The rest of the water downcut at the opposite wall.

Today involved a lot of sand rearrangement inside a 3×5 m plywood tank, waterproofed with a pond liner. A student helper named Tom and I spent the first half of the morning digging a big trench at the “upstream” end of the tank, where the water input is, and then the second half of the morning filling it back in. By late this afternoon, I’d leveled a berm and “downstream” (back-barrier) plane, and steeled myself to turn on the water for a trial run.

Basically, the set-up is this: water ponded on one side of a barrier finds its way over the top, flowing onto the back-barrier plane. Where it breaches the barrier erodes, creating a series of depositional lobes on the back-barrier side. The hypothesis here is that “throats” of flow across the berm compete with each other for flow capture, resulting in cool back-barrier patterns.

The first run nearly worked as planned. “Edge effects” ultimately foiled it – water hammered through the barrier along one of the tank walls, which isn’t ideal but is easily corrected. Water was ready to crest the middle of the berm in a couple of places. In the end, one lobe (shown above) started to form but quickly had its flow sapped by the unintentionally vigorous breach. So it goes.

Back at it tomorrow with new tweaks.

Stay tuned for preliminary laser scans! As soon as I figure out how to retrieve them. They’re in the computer.